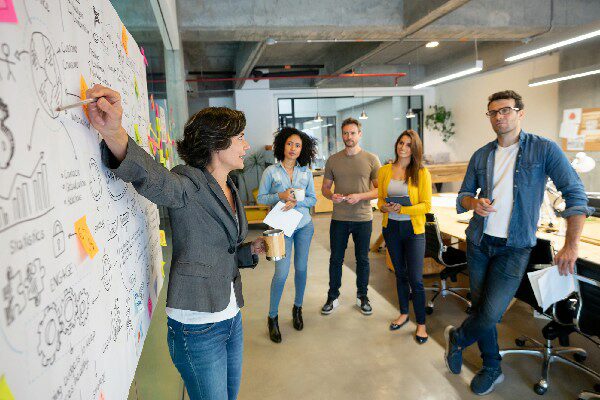 People tend to avoid change. Whether it’s deciding what to order at a restaurant or selecting a new software for your company, choosing something you’re already familiar with is often the most tempting path.

But if businesses want to stay competitive, change is necessary. According to Gartner, the typical organization today has undertaken five major organizational changes over the past three years. Find out what status quo bias is and how you can address it at your organization.

Status quo bias is defined as the preference for maintaining one’s current situation and opposing actions that may change the state of affairs.

The term was coined in 1988 by researchers William Samuelson and Richard Zeckhauser in the academic article “Status Quo Bias in Decision-Making.” They conducted decision-making experiments to show that when given the choice between the status quo and a new option, individuals were more likely to stick with what they already knew.

Status quo bias is a cognitive bias based in emotion. Change naturally invites risk, and people may be uncomfortable putting themselves in situations where the outcome is uncertain. This tendency to keep things the way they are can have a considerable effect on how people behave in virtually any aspect of life.

What Effects Does Status Quo Bias Have?

Simply put, status quo bias negatively affects your ability to make decisions. Your ingrained preference for stability keeps you from judging different options fairly, which may cause you to miss out on valuable opportunities.

Status quo bias can also hinder the growth trajectory of a business. If executives and managers aren’t willing to take risks that could benefit the business at large, the company could begin to stagnate. In addition, status quo bias plays a role in an employee’s ability to adapt to new processes and procedures.

Examples of Status Quo Bias in the Workplace

Below are some examples of how status quo bias may come into play in a professional environment:

An employee has the opportunity to join a different department at her company. She is worried about the process of transitioning to the new role, so she rejects the opportunity.

The contract with one of your vendors is about to expire, and you renew the deal without giving much thought to whether or not competitor organizations would be a better fit for your company.

During open enrollment for healthcare coverage, an employee selects the same insurance plan he had previously. There are several new plans being offered, but the employee doesn’t have any major issues with his current insurance, so he doesn’t take the time to explore the new options.

Your company is considering moving to a new project management software and decides to poll employees about the potential switch. The employees overwhelmingly show a preference for keeping their existing software, simply because they are familiar with it.

How to Overcome Status Quo Bias at Work

Overcoming cognitive biases is part of effectively inspiring change in the workplace. At a large scale, the poor decision making caused by the status quo bias can greatly affect the success of your organization. The company may miss out on new growth opportunities simply because the individual employees were afraid to take a risk.

If you’re in a leadership position, it may be up to you to communicate organizational change to your team. Here’s how you can avoid status quo bias when faced with a change in the workplace.

Learn to recognize status quo bias in yourself and others

One of the best ways to reduce status quo bias is to simply acknowledge it when it happens. Whenever a new change is proposed at work, pay attention to how you react. Are you hesitant? If so, why? Getting to the root of your concerns can help you determine if status quo basis is playing a role.

Weigh the advantages and disadvantages

Status quo bias is closely related to loss aversion—the idea that people focus more on what they stand to lose from a decision than what they stand to gain. To help your team understand the possible outcome of an organizational change, consider creating a list of pros and cons. Let your team members contribute to the list and discuss each point during a team meeting.

As much as possible, try to devote an equal amount of time to both the advantages and disadvantages of the proposed change. This will ensure that you are not inadvertently gravitating toward the negatives.

Related: 5 Ways to Empower Your Team to Make Decisions

Frame the default option as a loss

Keeping in mind the loss aversion principle, you may want to frame the default option as a loss when persuading others to take action. For example, if you’re trying to get your team on board with a new reporting tool, take the time to explain what they would lose out on by not adopting the new process. Maybe the existing process is more time consuming or doesn’t provide the same level of insights. In this case, you would emphasize that not taking action would lead to lost time and a poorer quality of work.

REDUCE is a change management framework that focuses on breaking down common barriers to change. It stands for Reactance, Endowment, Distance, Uncertainty, and Corroborating Evidence. Follow this framework when you present a new idea to your team to get them excited about the possibility of change.

For more information on how to use this framework, read our article, “What to Know About the REDUCE Framework for Change Management.”

There are many valid reasons why employees may be resistant to change—but if their hesitation is based solely on a preference for the status quo, then you may want to step in and persuade them to give the new idea a chance.

Wharton Online’s Digital Leadership Certificate Program includes a course titled Removing Barriers to Change in Organizations, which covers multiple strategies for initiating change within the workplace. In addition to change management, the Digital Leadership program includes lessons on leading your company through a digital disruption, the impact of the global digital economy, and the business applications of AI.

The Wharton School is accredited by the International Association for Continuing Education and Training (IACET) and is authorized to issue the IACET CEU.